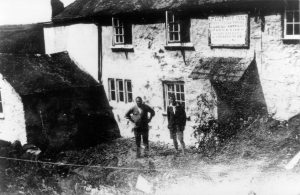 It is thought that the Peter Tavy Inn was originally built as somewhere for the stonemasons to live whilst rebuilding the village Church of St Peters in the 14th or 15th Century. It was probably a single storey thatched building divided into two rooms. It is unclear what use was made of the building after the stonemasons left, but at some point a further storey was added and fireplaces and chimneys built.

By 1819 the building was being used as an Inn. A sale catalogue of that date describes the building as comprising a kitchen, bar, parlour, three lodging rooms and a stable. 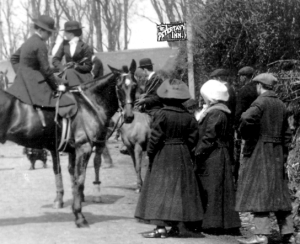 Mary Warne, daughter of a former Landlord, recalls that during her childhood in the 1920s, the bar was in the room to the left of the front door. It was furnished with a trestle table and two or three settles. Mild and Ale were served at the trestle table. There was no barman and usually someone would pop over from the kitchen to serve customers, leaving them to call out if they wanted more. In the evenings her father might stay in the bar for a chat and be available to serve beer. No women were allowed in the bar.

The Inn gained a brief moment of fame in the 1960s, when it was one of the locations used in the film Run Wild, Run Free starring Sir John Mills. Several villagers served as extras in scenes shot at the Inn.

In the 1960s the notorious criminal Frank Mitchell, serving his sentence at Dartmoor Prison, is said to have met his girlfriend at the Inn, when he was supposed to be with a prison working party at Baggator. It is said that two men, later recognised to be the Kray Twins, came to the Inn asking for Mitchell. In
December 1966 the Kray Twins helped him escape and Mitchell was murdered
shortly afterward.

In 1988 the Inn was extended at the rear to provide restaurant space, and the kitchen and outbuildings at the front were rebuilt to provide a new kitchen and a cellar.

NEWS FROM THE INN (Click on item title for full details)

The Weather in Peter Tavy